YOU'RE IN GOOD COMPANY! WORLD LARGEST COMPANIES RELY ON US TO RECOVER THEIR DATA

World leader in enterprise-storage data recovery. From XSAN to HP LeftHand, From EMC to Dell Equalogic Any RAID type, we recover it all... 24/7

RESEARCH + DEVELOPMENT = SUCCESS! INNOVATION IS THE KEY COMPONENT FOR BEING AN INDUSTRY LEADER

At WeRecoverData.com® RAID Data Recovery is one of our specialties in the array of data recovery services we offer . RAID is a great system for increasing speed and availability of data as it offers considerably more data protection than non-RAID disk systems. However, its management of the disks and the data distribution across them can be extremely complex. (Learn more about RAID)

TIP: How to choose the right company to perform RAID data recovery service?

They will most likely need the RAID Controller to identify the parity information or to use the controller to try rebuilding the array. These are simple steps that only work for very limited types of cases. This process can potentially damage the success of any future recovery, if done wrong. Also in most cases this attempt will not be successful due to drive corruption, which is the most common reason for arrays to fail in the first place.

We receive a large number of cases from customers who sent RAID arrays to other companies to attempt a recovery, and in many of them the data is lost forever due to failed recovery attempts.

Advanced knowledge and experience with file system formats at the sector level is critical for all recoveries. Understanding the HEX/Binary format at the lowest level that exists in file systems in general, and in particular for RAID arrays, is essential to the success of the recovery. The vast knowledge we have help us recover NAS or complex SAN devices which are using non-standard, proprietary or modified file systems .

See examples of our developments here and
here

“All our data is fully restored, and we’re back to normal. Thanks so much for saving our business!

We were in the middle of changing our office domain, and our main file server went down, evidently a physically damaged RAID. Then we discovered that the tape backup had not been functioning properly, so we’d lost about 5 month’s work. One of the things the disc had contained was a huge database for our major client (The Coca-Cola Company

) , and it was almost time to deliver it to them. If we couldn’t get our data back we would almost certainly go out of business.

We called the lab and took the server in for data recovery. They worked on it for over a week, and in the end recovered all the lost data. Needless to say, we have everything double backed-up now. ”

A: It’s still possible to recover the data on these cases. It will depend on the RAID controller’s functionality and how much data was copied to the array. Contact us to determine how we can help you in your RAID data recovery process.

Q: 2 drives we down and are not recognized by the system in our RAID 5 system, can you still recovery it?

A: It’s still possible to recover the data on these cases. We will have to create clones of the original drives with our equipment after disassembling the drives in the clean room. Then with the clones we will rebuild the RAID array using our proprietary procedure. Please send us all drives that were used in the RAID system, we will need all of them to recover the data.

(rād) Short for Redundant Array of Independent (or Inexpensive) Disks, a category of disk drives that employ two or more drives in combination for fault tolerance and performance.

There are a number of different RAID levels:

Striped Disk Array without Fault Tolerance: Provides data striping (spreading out blocks of each file across multiple disk drives) without redundancy. This improves performance but does not deliver fault tolerance. If one drive fails then all data in the array is lost.

Error-Correcting Coding: Not a typical implementation and rarely used, Level 2 stripes data at the bit level rather than the block level.

Dedicated Parity Drive: A commonly used implementation of RAID, Level 4 provides block-level striping (like Level 0) with a parity disk. If a data disk fails, the parity data is used to create a replacement disk. A disadvantage to Level 4 is that the parity disk can create write bottlenecks.

Block Interleaved Distributed Parity: Provides data striping at the byte level and also stripe error correction information. This results in excellent performance and good fault tolerance. Level 5 is one of the most popular implementations of RAID.

A Mirror of Stripes: Not one of the original RAID levels, two RAID 0 stripes are created, and a RAID 1 mirror is created over them. Used for both replicating and sharing data among disks.

A Stripe of Mirrors: Not one of the original RAID levels, multiple RAID 1 mirrors are created, and a RAID 0 stripe is created over these.

A trademark of Storage Computer Corporation that adds caching to Levels 3 or 4.

Non-standard RAID structure we can recover data from

We practically support any type of RAID level format due to our capabilities. 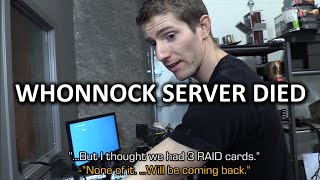 All of our data is gone
We experienced a MASSIVE RAID failure on Whonnock server and lost a crapload of data. Can we get it back?

“I just had the opportunity to speak with and thank WeRecoverData.com for their very prompt and professional work in support of the Shuttle Program.” Jay.

“All our data is fully restored, and we’re back to normal. Thanks so much for saving our business!” (Had physically damaged RAID)” Simon Hinkler, Vidipax, Manhattan, NYC

“I am extremely pleased with the services from WeRecoverData.com. They were able to successfully recover data after the physical failure of a Windows drive. I had the data back on a new drive within days. Thanks!” David Warden, Novell, Inc.

“I just wanted to write to tell you what a great job you and your technicians did to restore all of the data that I feared had been lost on my hard drive. Not only were you all so professional, but you did a bang-up job. I thank you again!” Gersh Kuntzman, NY Post, Manhattan, NYC


This site is registered on wpml.org as a development site.